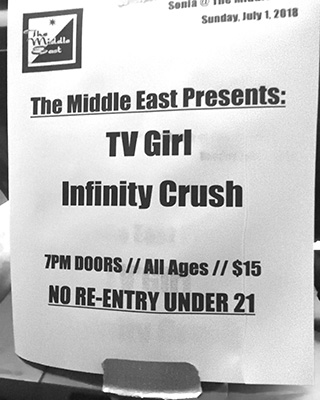 I had been wanting to see TV Girl for a long time now, but there were always conflicts when they came through the Boston area but tonight, I finally got my chance to see them live. I got to Sonia in Central Square pretty quickly for what was a very early show that started around 8:15pm.

I went to the bar and got a Jack’s Abby Hoponius Union and after chatting with the two super friendly bartenders about beer for a few minutes (including my last experience with that god awful pineapple UFO), I found a spot amongst the fairly small crowd to watch Infinity Crush.

Infinity Crush’s Caroline White played a short solo set of indie folk songs that lasted about 25 minutes. Telling stories and bantering with the audience between songs, she seemed to have won over a lot of the crowd with her humor. Also, she had her set list written on her hand which was kind of cute.

After Infinity Crush finished, I ordered another Hoponius Union and was ready to see TV Girl, who got set up and started pretty fast. 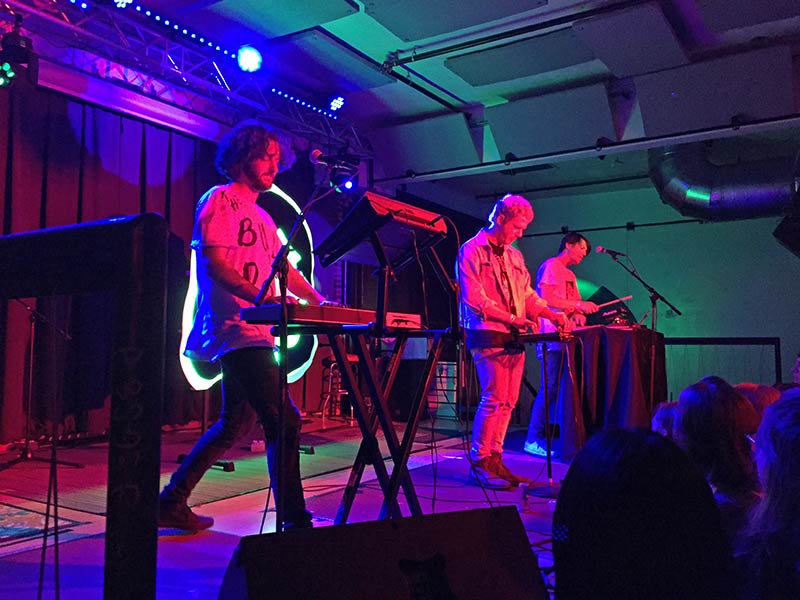 With all three members of TV Girl standing behind various synthesizers, the band tore through a set of pretty mellow indie synth pop that gave the diehard crowd exactly what they wanted. At times dreamy, others hazy, and it all came together in such a perfect way. The band seemed pretty relaxed and just going with the flow, which kept things very light hearted, including some of the speeches between songs.

This was a really fun show and I was happy to finally get to see TV Girl, although I was a little bummed they didn’t play “If You Want It”, which is my favorite song by them (and admittedly, one I seem to still find myself humming a lot). I finished out the somewhat early night by hitting up what else but Tasty Burger in Harvard Square.

This site uses Akismet to reduce spam. Learn how your comment data is processed.