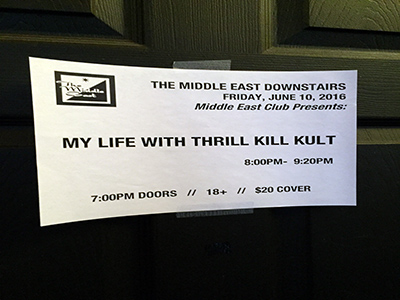 I really struggled with whether or not to go to this show. I used to really be into My Life With The Thrill Kill Kult in the 90’s when I went through a goth/industrial phase that…uhh…we won’t talk about. But there were some other good shows happening this night too (the Bearstronaut record release, amongst other things). Worried that I would stick out like a sore thumb because of the goth dance night that was taking place immediately after (which by the way, leads me to the “dress code” of goth/fetish/all black at those kinds of nights…really? 1, I’m too old for that shit, 2, why would I want to dress like and encourage a stereotype?, and 3, what if I just really enjoy the genre and want to go out somewhere to hear some music, meet some new people, and have a couple of beers? Don’t get me wrong, I understand the reasons, but still…Ok…rant over).

When I arrived at the Middle East Downstairs, there was a line stretching through the restaurant portion of the club, with a lot of people waiting to get in. There was no opener for this show and the band had already started while I was waiting in line. The people waiting around me were really friendly, which is at times, hard to find in Boston. Also, my fears of not being in some sort of goth-wear were alleviated when I noticed that most of the people there were dressed in regular clothes. 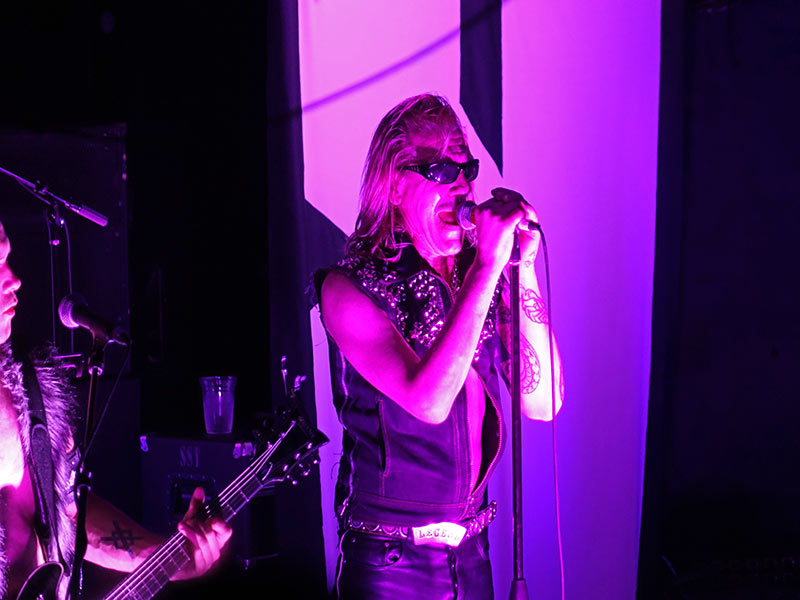 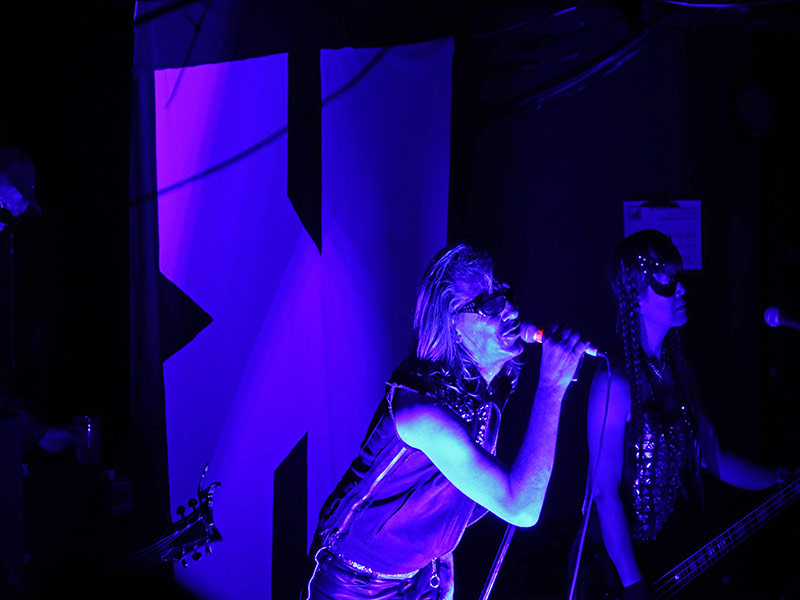 My Life With The Thrill Kill Kult

Once inside, the club was only about half full and I grabbed a Jack’s Abby Hoponius Union to watch the band as they were already playing “Leathersex”. Thrill Kill Kult pretty much played a nonstop set. The crowd erupted into cheers every time one of the hits like “Sex on Wheelz”, “The Days of Swine and Roses”, and “Kooler Than Jesus” started. They left the stage for a few minutes and the crowd started chanting for more songs. There were loud cheers when they came back out and did an encore which seemed to be a little more on the electronic side of things. 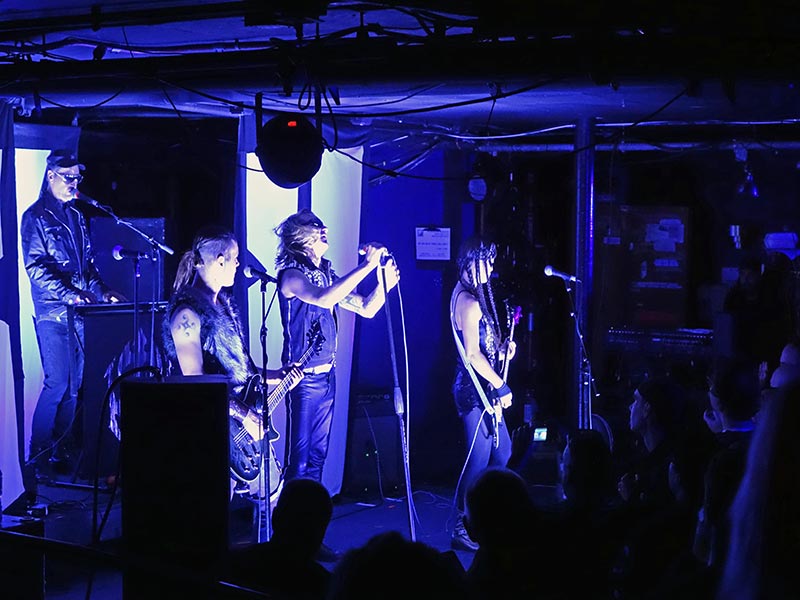 My Life With The Thrill Kill Kult

This was an early show, with no opener, so it was over around 9:30pm. I thought about heading over to The Sinclair for the Bearstronaut show, but was kind of hungry, so I ended up Shake Shack in Harvard Square for some food that really hit the spot. Back on the T to Alewife and I was home by 11pm, which felt really strange. Either way, I had a really good time at the show and it was cool to see Thrill Kill Kult for the first time since the 90’s.

I got a late start for what is usually a pretty long ride on the T. Red line to Green line and back at the end of the night (before it stops running ), but for some reason, tonight, it went by pretty fast. I got to the Paradise, bought a ticket at the door (where I also noticed several people buying earplugs) and made my way to the bar for a much needed Harpoon IPA.

The first thing I noticed was that a lot of people were wearing black leather trenchcoats, had long hair, and/or were gothed out at this show. Was I in the Matrix? I thought the industrial “look” died out in the 90’s (and yeah, I went through that phase in the early 90’s) but apparently not. Maybe people are getting ready for Man Ray to reopen soon.

I managed to catch the last 5 songs of Legion Within‘s set. They weren’t bad, and a good portion of the crowd seemed to like them, but I just wasn’t really into it. The lead singer seemed really nice and was chatting with people at the merch table though. Also, I was kind of surprised to find out they were from Seattle, as this isn’t the kind of music usually associated with that city. It was back to the bar for a Harpoon UFO and then to find a good spot to watch KMFDM.

KMFDM took the stage to chants of “KMFDM sucks!” and went right into “D.I.Y.“. They also played “Kunst“, which is my favorite song off of the new album of the same name. It was a pretty straightfoward set, with very few breaks between songs. As expected, the crowd was really into every song. The band came out for 2 encores. They started to play “Sucks” but went into another song. The night ended with “A Drug Against War” which had the crowd fired up.

It was a really fun show and I was glad to see KMFDM again. That being said, they put on a much better show when I saw them at Lupos in Providence 10 years ago for the WWIII tour, that included screens with visuals behind them and a lot, I mean a LOT of strobe lights (where they had warnings at the door about not coming in if you’re prone to epileptic siezures from strobe lights). It would have been cool to get a couple of long desired KMFDM t-shirts, but they didn’t have any left in my size, unless I was a small (not happening) or a 2xl or larger (seriously???). Perhaps I’ll have better luck the next time they come through Boston.